Above Break Even Probability: 41%

NEW ALL TIME FOREVER record highs in the NDX Nasdaq 100 index last week show no quit in Tech.  This sector is 25% off the August extreme lows and up double digits in 2015.

A onetime market maven, Blackberry has not been on the same upward path recently losing 23% over the last year. Blackberry has brand value to unlock.  The stock has seen a drop from $70 in 2011. 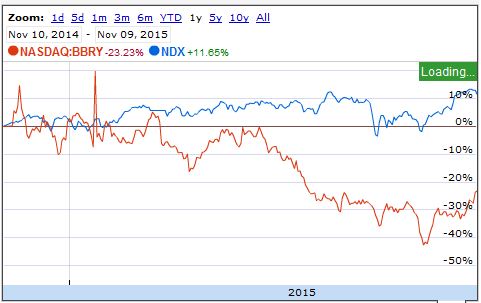 Price action over the last four months has tracked between $7 and $8 to target $9 on this price breakout.  The $9 level also represents the halfway mark of the $6 to $12 of the last 52 weeks AND the old channel bottom to break through..

The June option has seven months for Bullish development.

With BBRY at $8.05, for example, an In The Money $5.00 strike option currently has $3.05 in real or intrinsic value.  The remainder of any premium is the time value of the option.

Trade Setup: I recommend the BBRY June $5 Call at $3.75 or less. A close in the stock below $6 on a weekly basis or the loss of half of the option premium would trigger an exit.

The option also behaves much like the underlying stock with a much less money tied up in the investment. The Delta on the $5 strike call is 88%.

The June option has seven months for bullish development.  This option is like being long the stock from $5, solidly below the decade low at $5.44, with completely limited risk.

The maximum loss is limited to the $375 or less paid per option contract, with a stop at $175. The upside, on the other hand, is unlimited.

The Blackberry option trade break even is $8.75 or less for the stock at expiration ($5 strike plus $3.75 or less option premium). 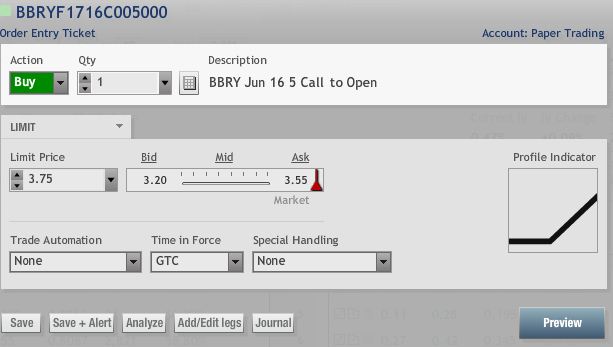 If shares move above the $9 first objective the next target is the top of the old sideways channel at $11.  A move to $11 would nearly double the option investment.