The August market low seems long ago…Tech has surged 25% form that bottom to produce a double digit gain in 2015 with two months to go.

Epic jumps in behemoths Google, Amazon, and Microsoft has propelled the Nasdaq 100 to new ALL TIME FOREVER heights

The breakout rally in the NDX index 4400 to 4600 range targets a measured move in the market leading index to 4800.

Facebook has long ago shaken off the blahs that often occur after the “What Now” reality of IPO excitement.  Remember the opportunity when FB fell to under $20 in 2012 and everyone but believers were bitter.

Unique trans-formative technologies have to unlock the monetization riddle, once FB cracked the code in mobile it was money…

A very similar story arch is developing in Twitter.

Twitter loss minus 25% in the last year of trade is double the 12% gain in Tech. 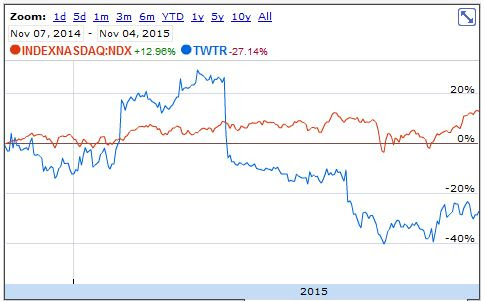 After New LIFETIME TWITTER lows the stock has rebounded back above the psychological $26 IPO price that lucky customers in November 2013  had handed to them.

ONE WORD…VIDEO… could be a game changer to monetize tweets ala the Facebook.

A $26-$34 trading range has captured action over the last three months plus.  The $30 level right here is the midpoint resistance of this sideways channel.  A move above $30 targets a quick run to $34.

The January option has nearly three months for Bullish development.

With TWTR trading at $29.75, for example, an In The Money $25.00 strike option currently has $4.75 in real or intrinsic value.  The remainder of any premium is the time value of the option.

Trade Setup: I recommend the TWTR January $25.00 Call at $5.75 or less. A close in the stock below $24 on a weekly basis or the loss of half of the option premium would trigger an exit.

The option also behaves much like the underlying stock with a much less money tied up in the investment. The option Delta is 80%.

The January option has nearly three months for bullish development. 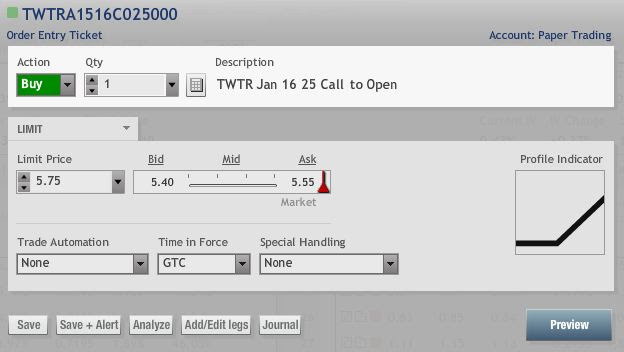 The maximum loss is limited to the $575 or less paid per option contract.  A stop loss is placed at half of the premium paid to lessen dollar exposure.

If shares move the $34 top of the recent trading range, the option would be worth $9 for more than a 50% return on investment.