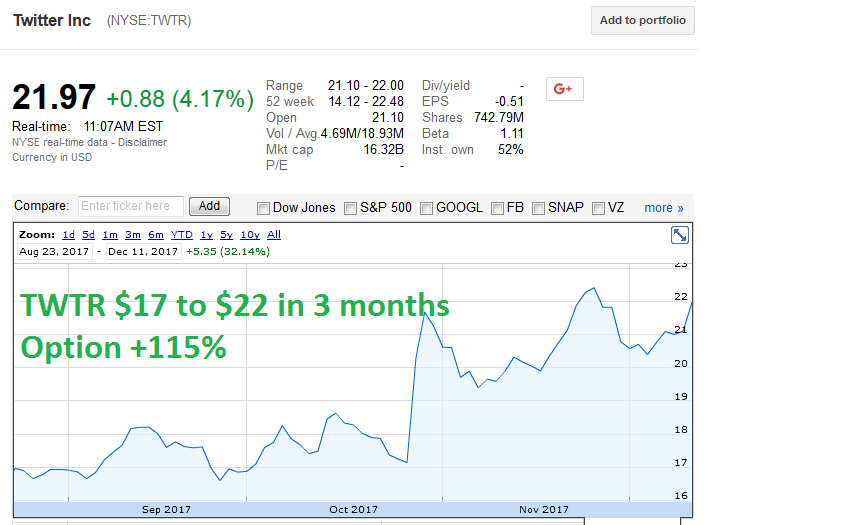 ANOTHER BIRD BUY AFTER 55% PROFIT IN JULY

Above Break Even Probability: 39%

Tech had led the 2017 rally run up more than 20% YTD even with bouts of profit taking unwinding.  Recent pull back has Nasdaq negative for the past four consecutive weeks.

Turnaround Tuesday saw a BIG BOOST in stocks getting back half of the losses on this drop from the top.

Twitter has traded mostly between $14 extreme lows and $20 for the last year and six months.

A move above $17 midpoint price pivot sends TWTR on another rally run to shake the skeptics.

A TWTR breakout above the $20 top targets $26 which stands 50% up above.  That $26 objective also coincidentally is the IPO price when the stock was launched just a few short years ago.

The March option has seven plus months for Bullish development.

With TWTR trading at $16.70, for example, an In The Money $14.00 strike option currently has $2.70 in real or intrinsic value.  The remainder of any premium is the time value of the option.

Trade Setup: I recommend the TWTR March $14.00 Call at $3.75 or less.  A close in the stock below $15 on a weekly basis or the loss of half of the option premium would trigger an exit.

The option also behaves much like the underlying stock with a much less money tied up in the investment. The option Delta is 75%.

The March option is only $50 more expensive than the January option to get 60 extra days of time.

The maximum loss is limited to the $375 or less paid per option contract.  A stop loss can be placed at half of the premium paid to lessen dollar exposure.

The TWTR option trade break even is $17.75 or less at expiration ($14.00 strike plus $3.75 or less option premium). That is just little more than a dollar above the current price.

If shares move the $26 measured move target , the option would be worth $12+ for more than a 200% return on investment.