Stock unwinding has hurt some of the BIG BOYS the worst.  DOW components Exxon and Wal-Mart have been among the poor performers and leading losers in 2015.

A bounce from the August extreme sell off lows, the first 10% correction since 2011, has major market indexes back to positive over the last 52 weeks.  The YTD performances leaves room for last quarter improvement as a technical base has been built after the stock shake out.

The worst return in the DOW since January 1 belongs to behemoth Wal-Mart down 22% so far this year.  WMT had regularly outperformed the DOW until this recent draw down.  Look for a snap back attack in an out of favor money generator. 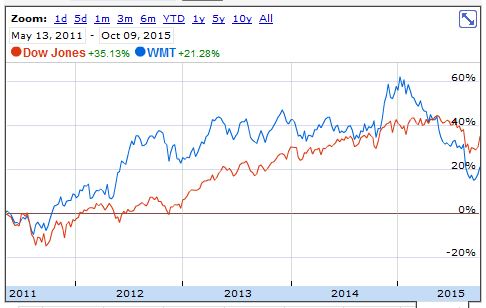 FOLLOW THE MONEY… a fall season of cheap gasoline may be all the reason to see more spending at America’s largest retailer that is trading at a multiyear discount.

Technically, the price pattern has seen WMT trade mostly between $70 and $80 over the last years.  The upside target at the $80 channel top resistance is 20% above at the unchanged level for 2015.

The March option has almost six months for Bullish development.

A Wal-Mart long call option can provide the staying power in a potential bullish trend extension.  More importantly, the maximum risk is the premium paid.

With WMT at $66.75, for example, an In The Money $60.00 strike option currently has $6.75 in real or intrinsic value.  The remainder of any premium is the time value of the option.
Rule Two: Buy more time until expiration than you may need — at least three to six months for the trade to develop.  Time is an investor’s greatest asset when you have completely limited the exposure risks.

Trade Setup: I recommend the WMT March $60.00 Call at $8.25 or less. A close in the stock below $62 on a weekly basis or the loss of half of the option premium would trigger an exit.

The option also behaves much like the underlying stock with a much less money tied up in the investment.  The Delta on the $60.00 strike call is 81%.

The March option has six months for bullish development.  This option is like being long the stock from $60.00 a price not seen in WMT since 2012 with completely limited risk.

The maximum loss is limited to the $825 less paid per option contract.   A money management exit will be placed a half of the premium paid so the risk is $400 if stopped out there. 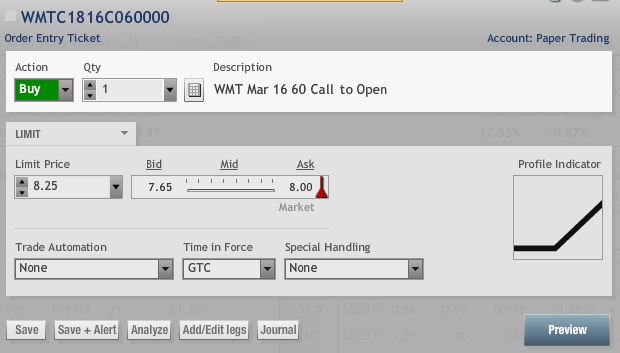 If shares hit the $80 price target the option would be worth $20 for a 150% return on investment.