Place order to sell the EWJ September $10 Call at $1.60 or better with September expiration just 10 days away. 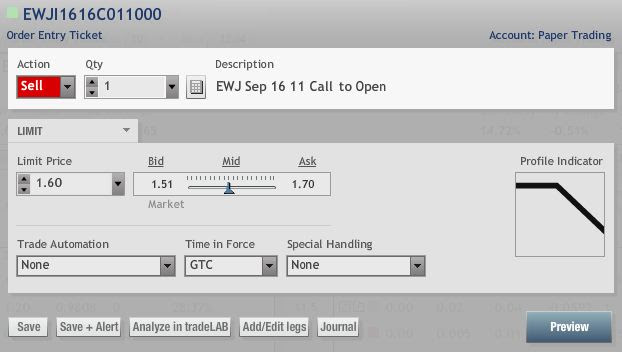 Global markets have stabilized and now surged after the New Year nonsense.  The broad market S&P melt up is now over 15% off the bottom base to move positive in 2016 and also over the exhausting last 52 week period. 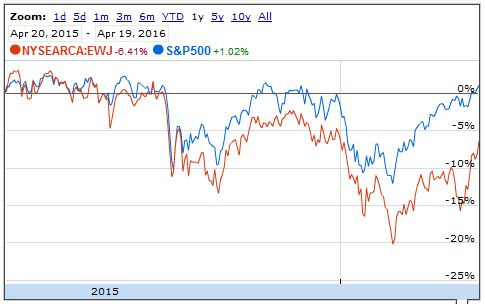 Never fight the fed has been translated into many languages…Central banks around the world are hard in attempts to stimulate inflation and economic growth for their home countries.

The Japanese market as viewed by the EWJ iShares Japanese Exchange Traded Fund has cut losses from the minus 20% level to a more modest negative 6% over the last year of trade.

EWJ has largely tracked from $11 to $12 for the last three years plus.  This positive price push above $12 has the first measured move objective target at $13 which stands a healthy 8% higher.

Only close below the $10 support level on the weekly basis would negate the bullish trend.

An EWJ long call option can provide the staying power in a potential larger trend extension.  More importantly, the maximum risk is the premium paid.

Rule One:  Choose an option with 70% plus probability.  The Delta is a measurement of how well the option reacts to movement in the underlying security.   It is important to buy options that payoff from only a modest price move.

With EWJ trading at $12.10, for example, an In The Money $11.00 strike option currently has $1.10 in real or intrinsic value.  The remainder of any premium is the time value of the option.

Investors often buy too little time for the trade to develop.  Nothing is more frustrating than being right but only after the option has expired premature to the market move.

This option strike gives you the right to buy the shares at $11 per share with absolutely limited risk.  The 52 week low is $10.18 to put price into perspective.

The September option has five months for BULLISH development.  An 80 Delta on this strike means the option will behave much like the stock.

The maximum loss is limited to the $150 or less paid per option contract. 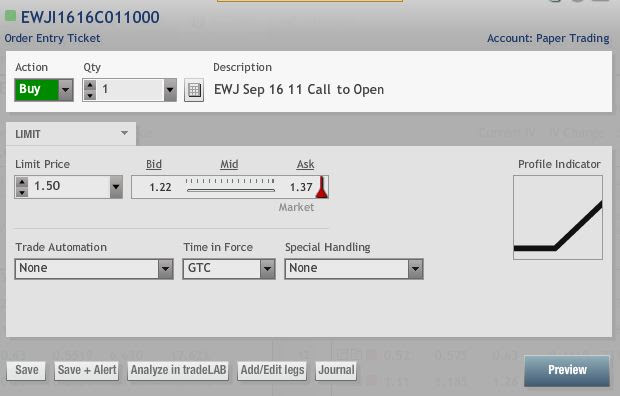 The EWJ option trade break-even is $12.50 or less at expiration ($11 strike plus $1.50 option premium). That is less than 50 cents above the current iShares Japan ETF price.