Above Break Even Probability: 57%

The broad market S&P is stuck not marking a new high in more than a month…A stall in the surge can be attributed to a quiet couple of weeks lacking fundamental facts with earnings reports to start again soon.

Another drag had been the Oil fall below $50 to put pressure on energy stocks.  A double bottom in Crude and a 5% bounce last week has that market on the move once again.

Oh CANADA can be OOOOOO Canada with Oil making another upside push for the resource rich region.  The Canadian stock market has slowed in the last few years on the tumble from triple digit Crude prices.

The iShares Canada  ETF is barely positive in the last years compared to the S&P boom of 66%.  Canada is a commodities play with a lot of bullish potential at these beaten down resource prices.

EWC traded between $24 and $26 for much of the last year breaking out and achieving the measured move target at $28.  A second chance entry here leans on that old $26 resistance that is now support.

OOOOOO Canada can be headed to $30 on a push above the February $28 top.

The January option has almost ten months for Bullish development.

An In-The-Money option gives you the right to be long the shares from a lower strike price and costs much less than the ETF share cost itself.

Any trade has a fifty/fifty chance of success.  Buying In The Money options increase that probability.  That Delta also approximates the odds that the option will be In The Money at expiration.

With EWC trading at $26.75, for example, an In The Money $24 strike option currently has $2.75 in real or intrinsic value.  The remainder of any premium is the time value of the option.

Only a close in the FXI ETF below $24 on a weekly basis would trigger an exit. Notice the $24 strike has the right to be long from a discounted level not seen since the end of June.

The option also behaves much like the underlying stock with a much less money tied up in the investment.   The Delta of this $24 strike is 85%. 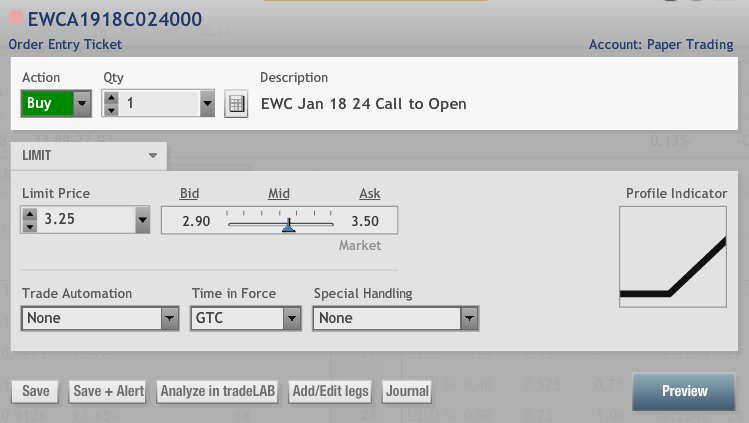 The January option has nearly ten months of time for bullish development.

The maximum loss is limited to the $3.25 or less paid per option contract.  New traders may want to use an exit stop loss at half the option premium to reduce dollar exposure. The upside, on the other hand, is unlimited.

The EWC option trade break even is $27.25 at expiration ($24 strike plus $3.25 or less option premium). That is about fifty cents above the current ETF price.

A push above $28 targets $30 which would put the option value at $6.00 to nearly double the original investment.