Second time in 2016 gassing up profits with British Petroleum.

The power of options was evident in the two month +67% BP trade exited July 1st.   The objective was met on a textbook trade to profit profusely on a modest move in the stock

A Crude Oil correction from $50 a barrel to under $40 has hurt energy stocks in the short term.   Technically Crude is barely back in bear market territory with the sharp selloff near the halfway support level for 2016.

A Dollar downturn has not helped Oil yet… though Gold has marched to highs.  Remember that Gold led the commodity reversal rally to start the New Year.

BP tracked between $28 and $36 for a year with the present pullback to the $32 midpoint of the sideways range.

The first target stands 10% above at the $36 channel top.   A $40 larger objective is that $4 trading range on top of the highs

A close below the $30 on a weekly basis would negate this bullish buying premise.

With BP trading at $32.70, for example, an In The Money $28.00 strike option currently has $4.70 in real or intrinsic value.  The remainder of any premium is the time value of the option.

This option strike gives you the right to buy the shares at $28.00 per share, just above the EXTREME multi year lows with absolutely limited risk. 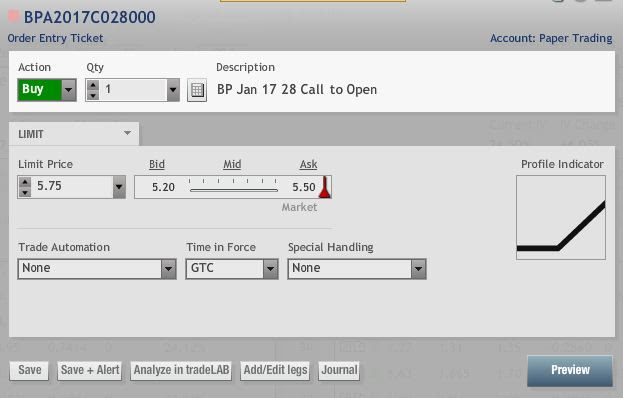 The January option has nearly six months for BULLISH development.  An 82 Delta on this strike means the option will behave much like the stock.

The maximum loss is limited to the $575 or less paid per option contract.   A stop loss at half of premium paid reduces the dollar exposure.  The upside is unlimited.