Summer stock surge saw the major markets march to new highs over and over.  The S&P 500 broad barometer has BOOMED marking new records more than 35 times in 2017.

This remarkable rally run has seen the Tech sector gain more than 20% YTD with fear of heights a mainstream malady with  some are constantly on the look out for a top and downturn.

BullsEyeOption has done well with an optimistic outlook for equities over these past years of positive stock performance.

This pullback is perfect to position with a protective play.

GDX the Gold Miners ETF was a performer when stocks were being sold.  Having the safety of Gold never gets old.

GDX has traded mostly between $20 and $26 in the last year of trade.  This price pullback puts the reward to risk in favor of the bulls at the $23 halfway mark of the last 52 weeks.

Lean on the $23.00 midpoint on a weekly basis as a support point to watch.

The June option has nine months for Bullish development.

With GDX trading at $23.50, for example, an In-The-Money $20.00 strike option currently has $3.50 in real or intrinsic value. The remainder of any premium is the time value of the option.

Trade Setup: I recommend the GDX June $20.00 Call at $4.50 or less. A loss of half of the option premium would trigger a position exit.

The option also behaves much like the underlying stock with much less money tied up in the investment. The Delta on the $20.00 strike call is 79% meaning that for every $1 move in GDX the option moves nearly 80 cents.

The June option has nine months for bullish development. This option is like being long for the stock from $20.00 with completely limited risk. GDX was last down at the $20.00 discounted level in December.

The maximum loss is limited to the $450 or less paid per option contract with the upside potential, on the other hand, unlimited.  A stop loss is placed at $200 for cash management purposes. 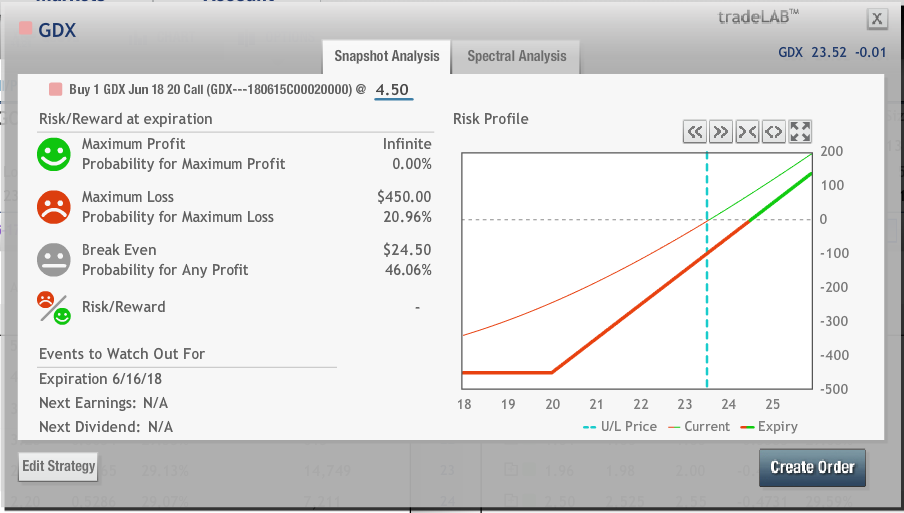