Above Break Even Probability: 54%

Blue Chips boomed to ALL TIME RECORDS in last month with August 15th marking the tip top in the DOW.  Sideways trade has seen a slide in the last few weeks with the industrial index still up more than 5% in 2016.

A handful of DOW stocks have not participated in the rally run with General Electric stuck at unchanged year to date.

Something has to give as this consolidation looks for a new catalyst to catch up to the DOW.

A weekly close below $28 would void the bullish bias.

A GE long call option can provide the staying power for a market upturn.  More importantly, the maximum risk is the premium paid.

With GE trading at $31.10, for example, an In The Money $28.00 strike option currently has $3.10 in real or intrinsic value.  The remainder of any premium is the time value of the option.

This option strike gives you the right to buy the shares at $28.00 with absolutely limited risk.

The June option has nearly ten months for BULLISH development.  An 81 Delta on this strike means the option will behave much like the stock. 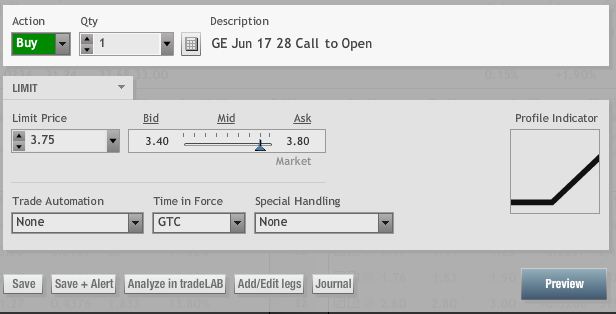 The maximum loss is limited to the $375 or less paid per option contract with a stop loss exit at half of the cost to reduce dollar exposure.   The upside is unlimited.