Above Break Even Probability: 44%

After a remarkable recovery rally run, metal and mining stocks have stalled but remained stable. Market moves of greater than 100% in mere months from the January extreme lows saw nearly straight up moves until summer.

A Gold fall below the $1300 support level can be attributed to recent U.S. Dollar strength as a December rate hike looms large.

Gold Miners can hit the mother lode when this near term commodity crisis stabilizes…ala Oil’s return to the top after a price pause.

GDX traded between $12 and $32 in the last year of trade.  This price pullback puts the reward to risk in favor of the bulls at the halfway mark of the last 52 weeks.   Look for the upside price gap to get closed and GDX to return to the $26 to $28 September sideways range

A modest move just back to the $28 level from the end of September would see nearly a 100% gain using the right limited risk option. This proposed play also has lower investment cost and less dollar risk than buying the GDX ETF shares outright.

With GDX trading at $22.90, for example, an In-The-Money $20.00 strike option currently has $2.90 in real or intrinsic value. The remainder of any premium is the time value of the option.

Trade Setup: I recommend the GDX January $20.00 Call at $4.00 or less. A loss of half of the option premium would trigger a position exit.

The option also behaves much like the underlying stock with much less money tied up in the investment. The Delta on the $20.00 strike call is 76% meaning that for every $1 move in GDX the option moves nearly 80 cents.

The January option has more than three months for bullish development. This option is like being long for the stock from $20.00 with completely limited risk. GDX was last down at the $20.00 discounted level in April. 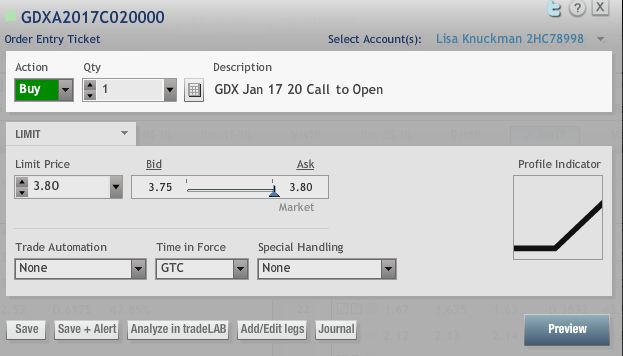 The maximum loss is limited to the $400 or less paid per option contract with the upside potential, on the other hand, unlimited.  A stop loss is placed at $200 for cash management purposes.