Above Break Even Probability: 40%

A short covering scramble in the crowded Oil market could be in the works.  Committed longs are few and far between as Oil stands at support after trading sideways $40-$50 for more than two and a half months.

Some whispers of the Saudis coming to their senses to discuss production cuts could mean the stalemate may end.  A dip below $40 last week failed to push lower with the August extreme low still in place even as the Dollar has strengthened to 100 once again.

The risk to reward favors a bull bias after the epic energy collapse.  The overwhelming negative sentiment can be a contrarian signal to be a buyer.

The April option has nearly five months plus for Bullish development.

A Marathon Oil long call option can provide the staying power in a potential bullish trend extension.  More importantly, the maximum risk is the premium paid.

Choosing an option can sometimes be a daunting task with all of the choices and expirations.  Simply put, traders want to buy a high probability option that has enough time to be right.

Good Options can profit from only modest directional moves.
Any trade has a fifty/fifty chance of success.  Buying options ITM options increase that probability.  That Delta also approximates the odds that the option will be In The Money at expiration.

With MRO trading at $17.50, for example, an In The Money $14.00 strike option currently has $3.50 in real or intrinsic value.  The remainder of any premium is the time value of the option.

Trade Setup: I recommend the MRO April $14.00 Call at $4.50 or less. A close in the stock below $14 on a weekly basis or the loss of half of the option premium would trigger an exit.

The option also behaves much like the underlying stock with a much less money tied up in the investment. The Delta on the $14.00 strike call is 80%.

The April option has almost five months plus for bullish development. This option is like being long the stock from $14.00 with completely limited risk.

MRO has not been below $14 since the financial crisis of 2009 when Crude Oil bottomed at $33 a barrel.

The maximum loss is limited to the $450 or less paid per option contract, with a stop loss exit at half of that premium. The upside, on the other hand, is unlimited. 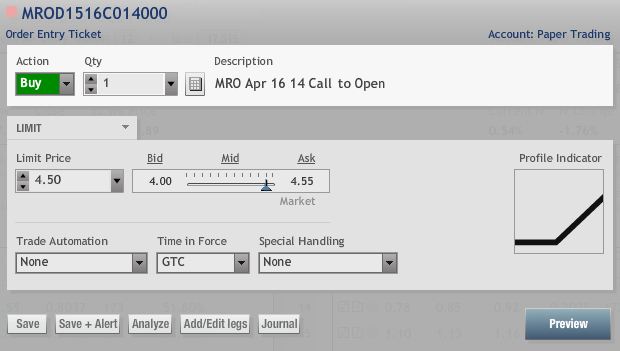