Above Break Even Probability: 40%

Election uncertainty is behind us with a positive reaction in stocks that had trapped trade sideways for many months.

A solid financial foundation has been built for the next president as the heavy lifting has been done to get the economy and markets on track to take off.

Unemployment is at 5%, corporate profits are at records and growing again, gas is at $2 per gallon, GDP is at 3%, housing has come back,  auto sales posted records, the stock market is 200% off the crisis lows, inflation in non-existent, interest rates remain near all time lows, income rose the most in a decade last year, and companies have Trillions of dollars in cash on the balance sheet.

It is nearly impossible to NOT be optimistic of the opportunities ahead.

With rates on the rise and the “Free Money” climate coming to a possible conclusion, DEALS ARE GOING TO GET DONE.  October was a record for corporate mergers and acquisitions as buying growth is a strategy for stocks.

Twitter technology played a HUGE part in this presidential cycle as a direct medium for communication changing the role of reporters in this campaign. 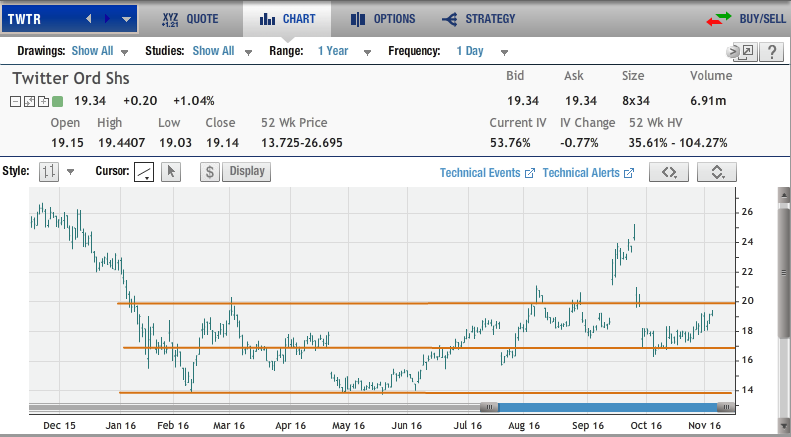 The stock is stuck in a range from $14 to $20 since January 1st with a false breakout when a TWTR takeover deal looked imminent.  The $17 midpoint of that sideways slog is an important level of support to lean on.

The May 24th extreme just below $14 saw bullish divergence with a new low but not a new high in volatility.

A TWTR breakout above the $20 top targets $26 which stands 33% up above.  That $26 objective also coincidentally is the IPO price when the stock was launched just a few short years ago.

The March option has four months for Bullish development.

With TWTR trading at $19.50, for example, an In The Money $16.00 strike option currently has $3.50 in real or intrinsic value.  The remainder of any premium is the time value of the option. 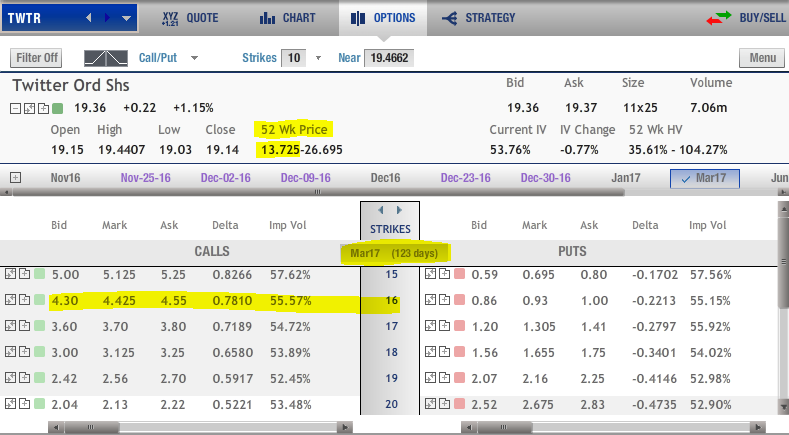 Trade Setup: I recommend the TWTR March $16.00 Call at $4.75 or less.  A close in the stock below $15 on a weekly basis or the loss of half of the option premium would trigger an exit.

The option also behaves much like the underlying stock with a much less money tied up in the investment. The option Delta is 76%.

The March option has four months for bullish development. 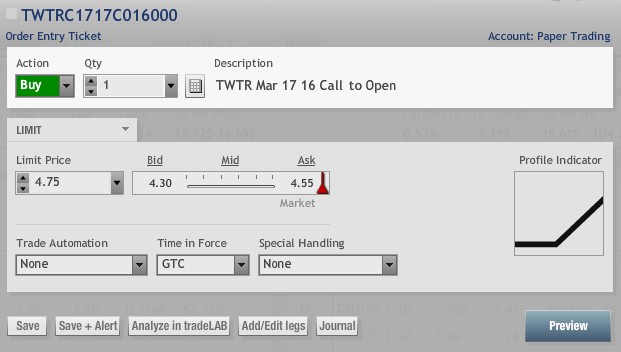 The maximum loss is limited to the $475 or less paid per option contract.  A stop loss is placed at half of the premium paid to lessen dollar exposure.

The TWTR option trade break even is $20.75 or less at expiration ($16.00 strike plus $4.75 or less option premium). That is just little more than a dollar above the current price.

If shares move the $26 measured move target , the option would be worth $10+ for more than a 100% return on investment.