Expiration Above Break Even Probability: 49%

FORD stock has been stuck in neutral down 15% in the last two years having a tough time even with ALL TIME RECORD vehicle sales.

Analysts are indifferent and the price to earnings ratio stands at 6, YES 6, so low expectation have seen the stock suffer.

Recent action has compressed between $13 and $14 for the last two months targeting $15 on an upside breakout.  That modest target is more than a 10% move in the stock.

In the bigger picture F has tracked from $16 to $11 in the last year with the price now at the midpoint pivot.  A technical wedge has formed with lower highs and higher lows that coincidentally converge at the $13.50 level a well with the bigger breakout target at $18.

With the $13 support right below… the reward to risk equation favors the BULLS at these levels.

The January option has eight plus months for Bullish development.

The actual shares are inexpensive compared to some other stocks but long-term money potentially tied up in the stock play could be put to better use.  An In-The-Money option gives you the right to be long the shares from a lower strike price and costs much less than the stock itself.

A Ford long call option can provide the staying power in a potential larger trend extension.  More importantly, the maximum risk is the premium paid.

Any trade has a fifty/fifty chance of success.  Buying In The Money options increase that probability.  That Delta also approximates the odds that the option will be In The  Money at expiration.

With Ford trading at $13.45, for example, an In The Money $13 strike option currently has $2.45 in real or intrinsic value.  The remainder of any premium is the time value of the option.

A close in the stock below $11 on a weekly basis or the loss of half of the option premium would trigger an exit.

The option also behaves much like the underlying stock with a much less money tied up in the investment.   The Delta of this $11 strike is 85%.

The January option has nearly nine months for bullish development with the right to buy at nearly the lowest level in the last year.

The maximum loss is limited to the $300 or less paid per option contract. The upside, on the other hand, is unlimited. 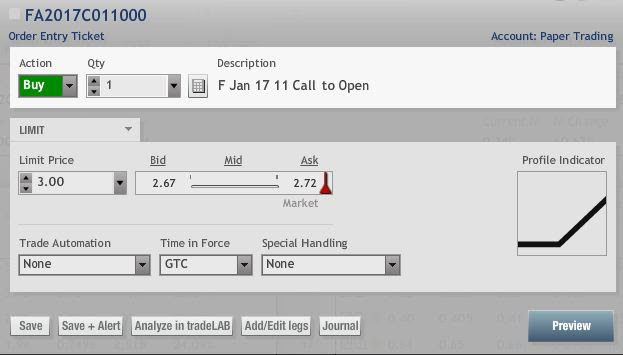 A push above $15 targets $18 which would put the option value at $7.00 to more than double the investment.