Above Break Even Probability: 45%

$60 has been significant for SBUX share prices.  It held as technical resistance July, August and September.

The $60 pivot was eclipsed on the upside in the three months of October, November and December.

Starbucks backed down and has been capped by $60 January, February and March.

A move to the $64 top puts the higher objective at $72 adding on the $8 trading range.   Starbucks stock split last April an illustration of strong coffee…

The July option has nearly four months for Bullish development.

With SBUX at $59.25, for example, an In The Money $55.00 strike option currently has $4.25 in real or intrinsic value.  The remainder of any premium is the time value of the option.

Trade Setup: I recommend the SBUX July $55 Call at $5.75 or less. A close in the stock below $55 on a weekly basis or the loss of half of the option premium would trigger an exit.

The option also behaves much like the underlying stock with a much less money tied up in the investment.  The Delta on the $55 strike call is 75%.

The July option has nearly four months for bullish development. This option is like being long the stock from $55 with completely limited risk. 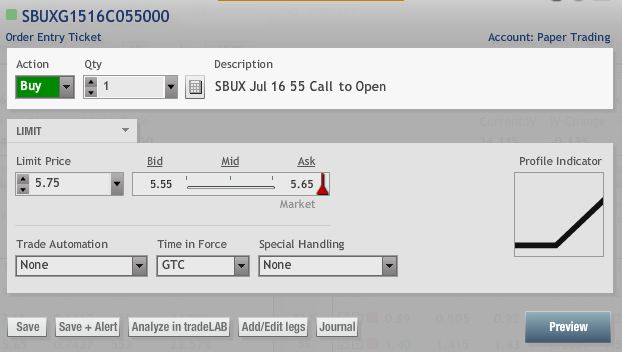 The maximum loss is limited to the $575 or less paid per option contract, with a stop at half of the premium paid. The upside, on the other hand, is unlimited.