Financials had fallen with losses leading the market decline in 2016.  Major markets have recovered though some sectors lag behind in buoyancy.

The XLF Financial ETF has recovered significantly from double digit percentage losses though it still stands negative YTD.   Prices have climbed above the $22 XLF resistance in a sign of renewed strength.

Bank behemoth JP Morgan has lagged behind in this macro recovery only now just making a break out move.

A move to $65 targets a full retracement to the $70 peak.  Risk reward favors the bulls at these levels in JPM.

The June option has four months for Bullish development.

A JPMorgan long call option can provide the staying power in a potential bullish trend extension.  More importantly, the maximum risk is the premium paid.

With JPM at $60.00, for example, an In The Money $55.00 strike option currently has $5.00 in real or intrinsic value.  The remainder of any premium is the time value of the option.

Trade Setup: I recommend the JPM July $55 Call at $6.25 or less. A close in the stock below $55 on a weekly basis or the loss of half of the option premium would trigger an exit.

The option also behaves much like the underlying stock with a much less money tied up in the investment.  The Delta on the $55 strike call is 78%.

The July option has four months for bullish development. This option is like being long the stock from $55 with completely limited risk. 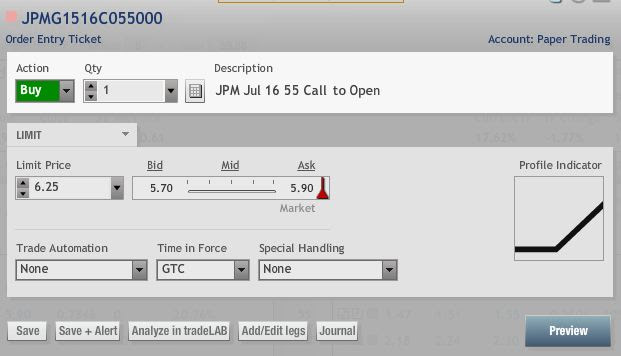 The maximum loss is limited to the $625 or less paid per option contract, with a stop at half of the premium paid. The upside, on the other hand, is unlimited.