Above Break Even Probability: 45%

Whole Foods stock had a half off sale cut 50% from the February of 2015 $58 highs.   Competition in organic goods and an increase in high end food stores have closed the gap with pedestrian everyday grocers.

The August option has over five months for Bullish development.

A Whole Foods long call option can provide the staying power in a potential bullish trend extension.  More importantly, the maximum risk is the premium paid.

With WFM at $33.75, for example, an In The Money $28.00 strike option currently has $5.75 in real or intrinsic value.  The remainder of any premium is the time value of the option.

Trade Setup: I recommend the WFM August $28 Call at $7.25 or less. A close in the stock below $28 on a weekly basis or the loss of half of the option premium would trigger an exit.

The option also behaves much like the underlying stock with a much less money tied up in the investment.  The Delta on the $28 strike call is 82%.

The August option has over five months for bullish development. This option is like being long the stock from $28, a low level not seen since 2011, with completely limited risk. 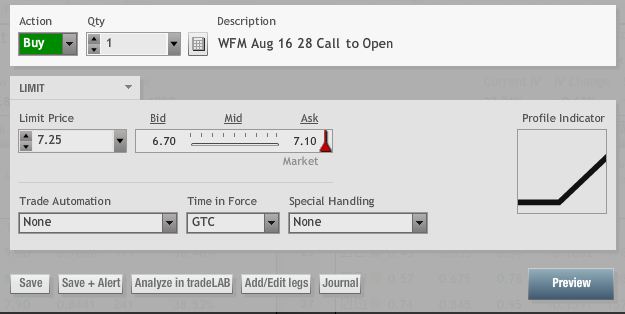 The maximum loss is limited to the $725 or less paid per option contract, with a stop at half of the premium paid. The upside, on the other hand, is unlimited.