A more than triple digit percentage gain was made in GDX early in 2016 timing the turn in GOLD.   Money was banked on the bottom base with patience employed in the last months waiting for a profit taking pullback.

GOLD itself has been sideways between $1200 and $1300 since February and has retreated back to the support lows.  Renewed rate hike discussions have firmed the US Dollar and knocked back the Midas metal for now.

GLD as the Gold Exchange Traded fund is holding the multiyear $114 pivot to put the reward to risk back in favor of the Bulls once again.   That key level is also the midpoint of the price action since 2014.

In the near term trade has traveled sideways from $114 to $124 for four months.  The first objective is the channel midpoint at $119 then the range top at $124.

Only close below the $110 on the weekly basis would negate this bullish buying premise.

A GLD long call option can provide the staying power for a market upturn.  More importantly, the maximum risk is the premium paid.

With GLD trading at $116, for example, an In The Money $110 strike option currently has $6.00 in real or intrinsic value.  The remainder of any premium is the time value of the option.

This option strike gives you the right to buy the shares at $110 per share, a price not seen since February, with absolutely limited risk.

The September option has three months for BULLISH development.   A 75 Delta on this strike means the option will behave much like the stock. 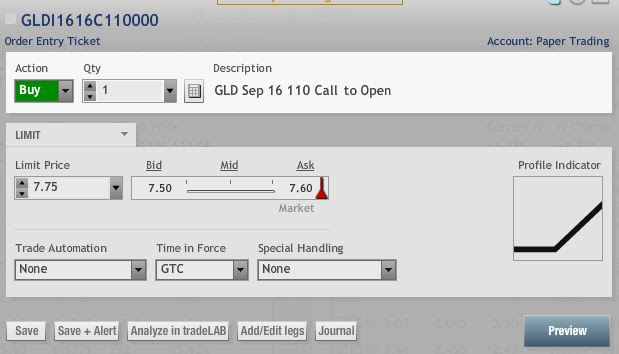 The maximum loss is limited to the $775 or less paid per option contract with a money management stop loss at half of the premium paid to preserve capital. The upside is unlimited.