Below Break Even Probability: 56%

Brexit but NOT Broken

The tape tells the truth with the overreaction onslaught erased in short order after the British blunder.  A couple of days of nervous selling shook stocks around the world before bargain hunters brought it back…and more new highs in the London FTSE and U.S. markets.

Sometimes it is equally important what a market DOESN’T DO with the Eurocurrency an example as it held strong with crisis lows at $107 in the FXE exchange traded fund.

THE DECADE LOW AT $103 FROM DECEMBER WAS NEVER EVER IN SIGHT.

FXE price action in the last year has tracked mostly from $104 to $112 with the over under pivot to watch at $108.   The first upside objective is the $112 resistance top.

The Brexit bashing was also another example of higher lows and lower volatility than the last currency crisis.

The January option has over six months for development.

A FXE long call option can provide the staying power in a potential larger trend extension.  More importantly, the maximum risk is the premium paid.

There is no need to ONLY make money on the all but infrequent long shot price explosions.   Good Options can profit from only modest directional moves.

Any stock trade has a fifty/fifty chance of success.  Buying options ITM options increase that probability.  That Delta also approximates the odds that the option will be In The Money at expiration.

With FXE trading at $107.50, for example, an In The Money $103 strike option currently has $4.50 in real or intrinsic value.  The remainder of any premium is the time value of the option.

Trade Setup: I recommend the January FXE $103 Call at $6.00 or less. A close in the below $105 on a weekly basis or the loss of half of the option premium could trigger an exit.

An option play also has staying power with the ability to ride through Ups and Downs that would force most stock traders out of the position.  The option also behaves much like the underlying stock with a much less money tied up in the investment.  The Delta is 75% for the $103 strike price.

January has over six months for development.

The maximum loss is limited to the $600 or less paid per option contract with a stop loss exit at half to lessen exposure.  The upside, on the other hand, is unlimited. 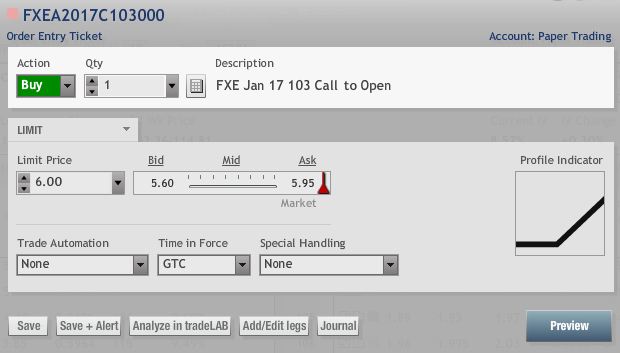 Essentially, you are long from $103, below the lowest level in the last decade, with over six months of time for ANY bullish development with absolutely limited risk to the $600 paid for the option.

A modest move to the $112 top of the recent range would see the option more gain 50%.