What a January it has been with new stock records across the board to build on the big gains in 2016.  The Blue Chip DOW led last year and has added 20% in the last year.

The reward to risk favors the DOW Bulls at these levels.  A third of the Dow components are negative in 2017 looking to play catch up to the rest and also the other indexes this New Year.

Verizon has been stuck in a range from $45 to $55 for four years. A push above the $50 midpoint sends VZ to the top of the longstanding sideways trade channel.

The first goal is $55 then $60 as the next measured move target.  Though the option DOES NOT capture the 5% VZ dividend, that yield reality supports the stock as a choice in any volatile conditions.

The January 2018 option has one year for Bullish development.

With VZ at $49.40, for example, an In The Money $45 strike option currently has $4.40 in real or intrinsic value.  The remainder of any premium is the time value of the option.

Trade Setup: I recommend the VZ January 2018 $45 Call at $5.75 or less. A loss of half of the option premium would trigger an exit.
An option play also has staying power with the ability to ride through Ups and Downs that would force most stock traders out of the position.

The option also behaves much like the underlying stock with a much less money tied up in the investment.  The Delta on the $45 strike call is 79%.

The January 2018 has nearly one full year for bullish development.  This option is like being long the stock from $45 with completely limited risk, which is below the $46 annual low. 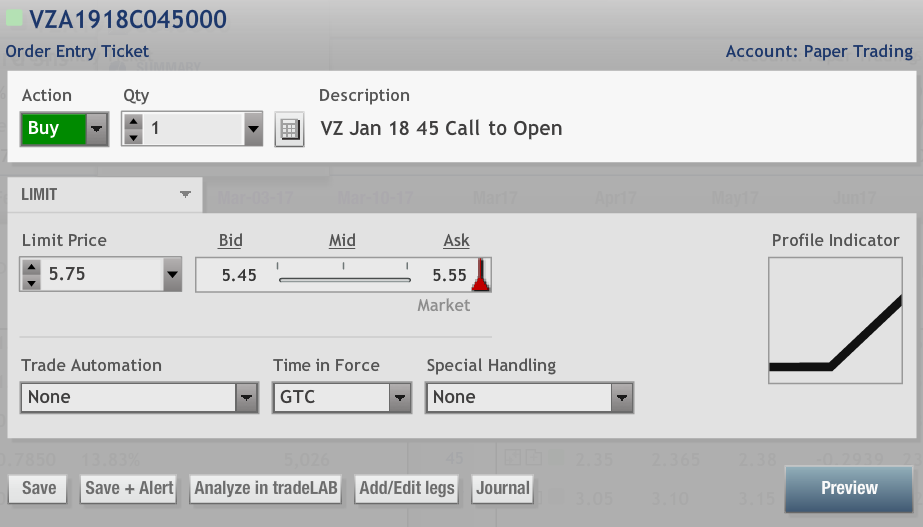 The maximum loss is limited to the $575 or less paid per option contract, with a stop at $275. The upside, on the other hand, is unlimited.

The VZ option trade break even is $49.75 or less at expiration ($45 strike plus $5.75 or less option premium).  That stands less about one dollar higher than the current trade.

If shares hit the modest $55 price target at the top of the four year trading range the option would be worth near $10 for a 100% return on investment.