Below Break Even Probability: 47%

Tech Wreck???  Or just giving back profits… a movie we have seen before??

Hello 2016…JITTERY January is now in the books.  Losses stood at 10% in major market indexes at the January 20th lows but have since rebounded.

That weekly KEY REVERSAL also occurred in Crude to suggest extreme lows may have been posted on this asset slide.

The sell off is similar in magnitude to October 2014 and August 2015.  It is important to note that new all time forever highs were posted in short order after the flush out flurry.

A pattern of sharp selling before each earnings cycle has appeared over the last few quarters.  Stocks then stabilized after the numbers the season got underway.  Yesterday marked the halfway point in earnings for the S&P 500 stocks.

The QQQ Exchange Traded Fund has been a strong performing diversified play for the last years decade as technology has outpaced the broad market.  The Nasdaq score was plus in 2015 to build on the big run the years prior…

The first upside target is the old breakdown base at $110.  .Above that objective stands the $115 all time highs from December.

The $100 area is the midpoint of the $115 to $85 trading track.    A close below that $100.00 QQQ psychological support level on the weekly basis may suggest another probe of the January lows.

Instead of buying long shares, a stock substitution strategy limits risk to the premium paid with unlimited upside profit potential.  Less capital is required and the risk is less in dollar terms than buying shares outright.

A QQQ long call option can provide the staying power in a potential larger trend extension.  More importantly, the maximum risk is the premium paid.

Rule One:  Choose an option with 70%-plus probability.  The Delta is a measurement of how well the option reacts to movement in the underlying security.   It is important to buy options that payoff from only a modest price move.

With QQQ trading at $103.50, for example, an In The Money $95.00 strike option currently has $8.50 in real or intrinsic value.  The remainder of any premium is the time premium of the option.

This option strike gives you the right to buy the shares at $100 per share with absolutely limited risk.   The option Delta is 78% so this position will act much like long shares at a sharply investment cost.

This April option has two and a half months for BULLISH market development.

The maximum loss if the option expires worthless is limited to the $1000 or less paid per option contract. A stop loss is placed at half of the option premium paid to lessen dollar exposure. 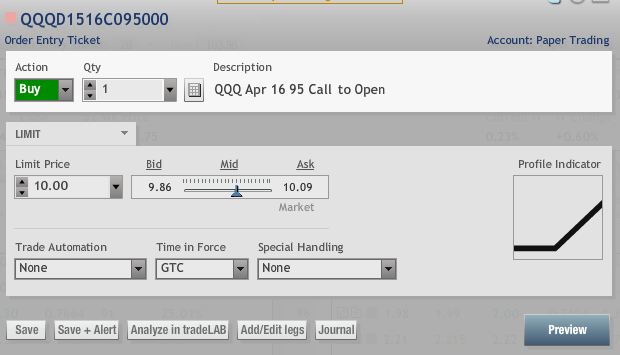 If shares recover to the $110 QQQ breakdown, the option investment would gain 50%.