Above Break Even Probability: 54%

Macro MO-mentum has buoyed all asset classes Gold, Stocks and Oil.  The stock rally run has been epic with little changed except optimistic attitude.

Sometimes it is more important what DOESN’T happen.

Oil has held ground against a backdrop of extremely negative fundamentals and prospects of the always trustworthy and reliable OPEC complying with production cutback promises .

The increase in U.S. Oil inventory to the highest level since they started keeping records and the weekly rig count increases have not knocked Crude down below the psychological $50 a barrel mark.

Sideways trade from $50 to $55 for over two months targets $60 on an upside breakout.

Energy G I A N T Exxon has been left behind on this stock market rocket to new ALL TIME HIGHS.   XOM is a leading loser in the DOW down 8% in 2017 alone with a 52 week break even performance compared to the industrial index up 27%.

In the last year Exxon has found a base at the $80 level to lean on.

The risk to reward favors a bull bias in XOM.  The overwhelming negative sentiment can also be a contrarian signal to be a buyer.

The July option has five months plus for Bullish development.

An XOM long call option can provide the staying power in a potential bullish trend extension.  More importantly, the maximum risk is the premium paid.

Good Options can profit from only modest directional moves.
Any trade has a fifty/fifty chance of success.  Buying options ITM options increase that probability.  That Delta also approximates the odds that the option will be In The Money at expiration.

With XOM trading at $83.00, for example, an In The Money $75.00 strike option currently has $8.00 in real or intrinsic value.  The remainder of any premium is the time value of the option.

The option also behaves much like the underlying stock with a much less money tied up in the investment. The Delta on the $75.00 strike call is 83%.

The July option has more than five months plus for bullish development. This option is like being long the stock from $75.00 with completely limited risk.

XOM has not been below $75 in more than a year. 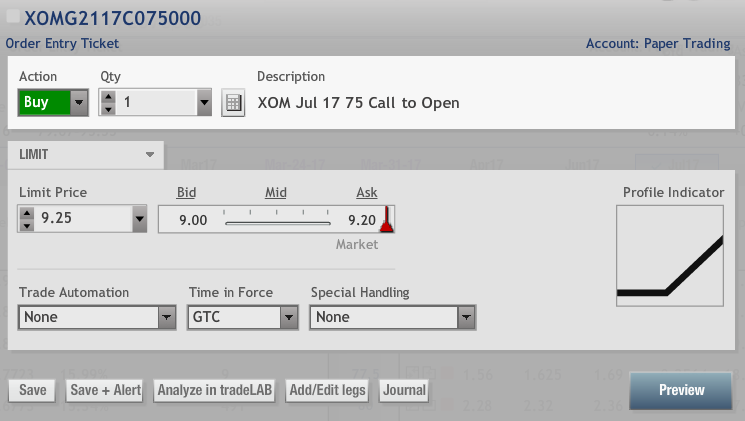 The maximum loss is limited to the $925 or less paid per option contract, with a stop loss exit at $450 half of that premium. The upside, on the other hand, is unlimited.