YES JUNE 2018 is only $75 more than January for an extra five months of time.

Above Break Even Probability: 50%

Banks boomed after the election only to recede in recent weeks.  The one year gains in the XLF Financial ETF from $18 to $23 total 25% even after the pull back into the sideways $23 to $24 range from December and January.

Wells Fargo has been in the news for all the wrong reasons, though Warren Buffet remains bullish for the LONG TERM in this particular bank.

WFC is down 5% YTD compared to the XLF unchanged 2017 action.

Wells Fargo has a public relations problem that time can solve making massive amounts of money in the mean time.

The June 2018 option has ONE YEAR AND TWO MONTHS for Bullish development.

A Wells Fargo long call option can provide the staying power until sentiment changes.  More importantly, the maximum risk is the premium paid.

With WFC at $52, an In The Money $45.00 strike option currently has $7.00 in real or intrinsic value.  The remainder of any premium is the time value of the option.

The option also behaves much like the underlying stock with a much less money tied up in the investment.  The Delta on the $45 strike call is 80%.

The JUNE 2018 option has A YEAR AND TWO MONTHS for bullish development. This option is like being long the stock from $45 with completely limited risk. 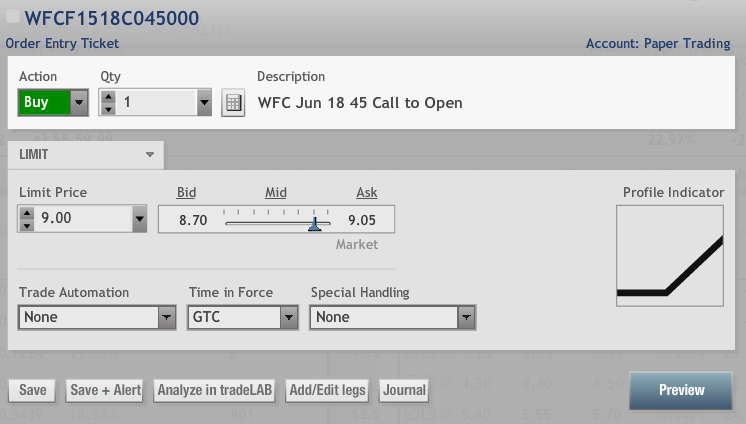 The maximum loss is limited to the $900 or less paid per option contract, with a stop at half of the premium paid.  Essentially risking $450.

The five month $50ish to $60 range targets $70 on an eventual upside breakout.