NEW ALL TIME FOREVER record highs in the NDX Nasdaq 100 index were posted in December with a price free fall to start 2016.

The double digit percentage drop did find a bottom for an epic bounce back, not to the extent of the S&P 500 and DOW, though Tech is still negative for the New Year. 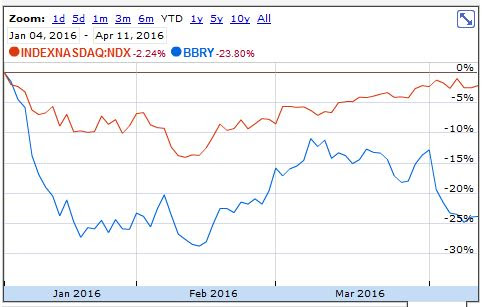 A onetime technology star, Blackberry has been beaten down 23% YTD.  The low share price and brand value possibilities to unlock puts reward to risk on the bulls side.

BBRY has tracked mainly between $7 to $8 for most of the last nine plus months.  An upside breakout targets $9 which is nearly 30% above.

Extreme lows in 2013 were posted at $5.44.  Bullish divergence with new price annual lows near $6 in September and no new highs in volatility suggested sellers had tired.

The January option has nearly ten months for Bullish development.

The Options Way: Unlimited Up Potential with Limited Risk.

With BBRY at $7.10, for example, an In The Money $5.00 strike option currently has $2.10 in real or intrinsic value.  The remainder of any premium is the time value of the option.

Trade Setup: I recommend the BBRY January $5 Call at $2.50 or less. A close in the stock below $6 on a weekly basis for two consecutive weeks would trigger an exit.

The option also behaves much like the underlying stock with a much less money tied up in the investment. The Delta on the $5 strike call is 85%.

The January option has almost ten months for bullish development.  This option is like being long the stock from $5, solidly below the decade low at $5.44, with completely limited risk.

The maximum loss is limited to the $250 or less paid per option contract. The upside, on the other hand, is unlimited.

The Blackberry option trade break even is $7.50 or less for the stock at expiration ($5 strike plus $2.50 or less option premium). That BE level is less than 50 cent higher. 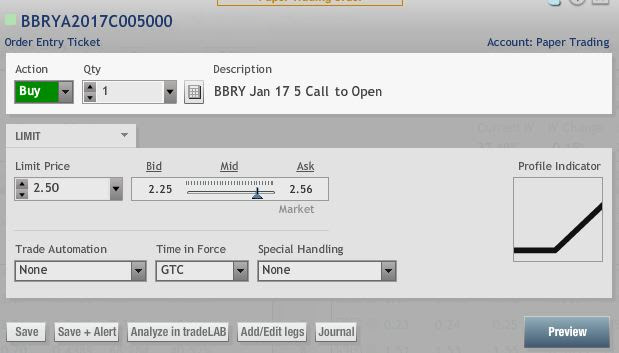 If shares move above the $9 modest measured move objective the option would be worth $4.00+ for more than a 50% gain.