Gold has gone nowhere waiting for a catalyst to pop above this $1300 to $1370 sideways action.

GDX the Gold Miners ETF has seen a series of lower highs and higher lows setting up for a big move.

GDX has traded mostly between $20 and $25 in the last year plus of trade.  This price pullback puts the reward to risk in favor of the bulls after breakout above the $22.50 halfway mark.

The push above $22.50 range midpoint pivot is positive.

The January option has eight plus months for Bullish development.

With GDX trading at $23.00, for example, an In-The-Money $20.00 strike option currently has $3.00 in real or intrinsic value. The remainder of any premium is the time value of the option.

Trade Setup: I recommend the GDX January $20.00 Call at $4.00 or less. A loss of half of the option premium could trigger a position exit.

The option also behaves much like the underlying stock with much less money tied up in the investment. The Delta on the $20.00 strike call is 78% meaning that for every $1 move in GDX the option moves nearly 80 cents.

The January option has more than eight months for bullish development. This option is like being long for the stock from $20.00 with completely limited risk. GDX was last down at the $20.00 discounted level in December 2016. 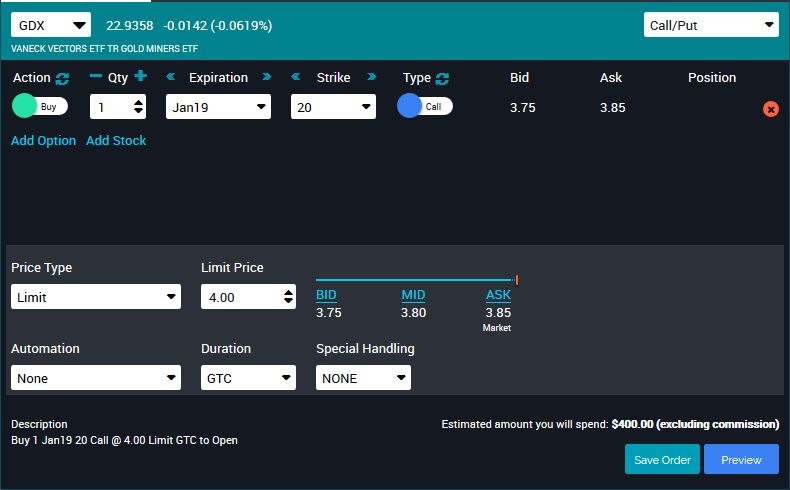 The maximum loss is limited to the $400 or less paid per option contract with the upside potential, on the other hand, unlimited.  A stop loss could be placed at $200 for cash management purposes. 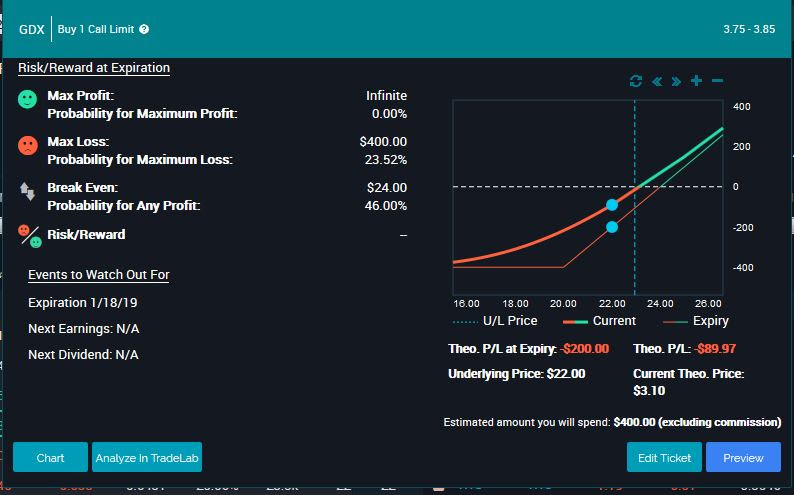 A GDX run to $30 more than doubles the option investment with maximum risk of $40 per contact.