ANOTHER BIRD BUY AFTER

Above Break Even Probability: 42%

Tech had led the 2017 rally run up more than 30% YTD even with bouts of profit taking unwinding.

FANG stocks were slammed Wednesday to drive down tech temporarily.   This is another opportunity to enter for continuation of the BULL RALLY RUN.

Twitter had traded mostly between $14 extreme lows and $20 for the last year and six months.

The breakout if the trading range targets $26 which interestingly is the IPO price many years ago.   The retracement to the $20 old resistance is an opportunity to get long TWTR.

A TWTR breakout above the $20 top targets $26 which stands 25% up above.  That $26 objective also coincidentally is the IPO price when the stock was launched just a few short years ago.

The March option has three plus months for Bullish development.

With TWTR trading at $20.50, for example, an In The Money $17.00 strike option currently has $3.50 in real or intrinsic value.  The remainder of any premium is the time value of the option.

Trade Setup: I recommend the TWTR March $17.00 Call at $4.50 or less.  A close in the stock below $17 on a weekly basis or the loss of half of the option premium could trigger an exit.

The option also behaves much like the underlying stock with a much less money tied up in the investment. The option Delta is 83%. 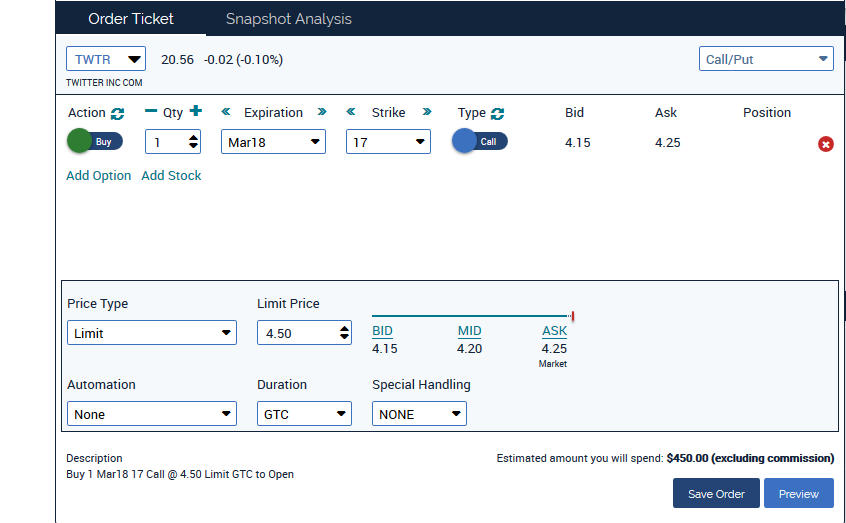 The maximum loss is limited to the $450 or less paid per option contract.  A stop loss can be placed at half of the premium paid to lessen dollar exposure. 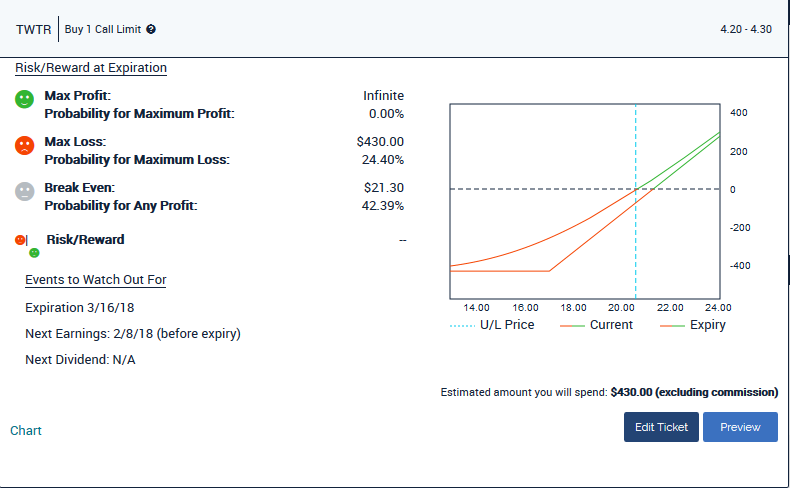 If shares move the $26 measured move target , the option would be worth $9+ for more than a 100% return on investment.