Starbucks stock has actually declined on this latest leg up compared to the DOW plus 20% in the last year.

Sideways SBUX trade has SUPPORT at $52.50 over the last two year of trade.  That level was hit twice in 2016 and again in August as a level to lean on.

The coffee break from $65 has been nearly straight down in the last weeks.  The joe has not always been cold with SBUX up 110% in the last five years.

A move above the $59 midpoint resistance of the last two years track sends stock to $65 top.

The April option has over seven months for Bullish development.

With SBUX at $54.00, for example, an In The Money $50.00 strike option currently has $4.00 in real or intrinsic value.  The remainder of any premium is the time value of the option.

The option also behaves much like the underlying stock with a much less money tied up in the investment.  The Delta on the $50 strike call is 73%.

The April option has seven plus months for bullish development. This option is like being long the stock from $50, below the 52 weeks SBUX lows, with completely limited risk.

The maximum loss is limited to the $575 or less paid per option contract, with a stop at half of the premium paid to lessen dollar exposure. The upside, on the other hand, is unlimited. 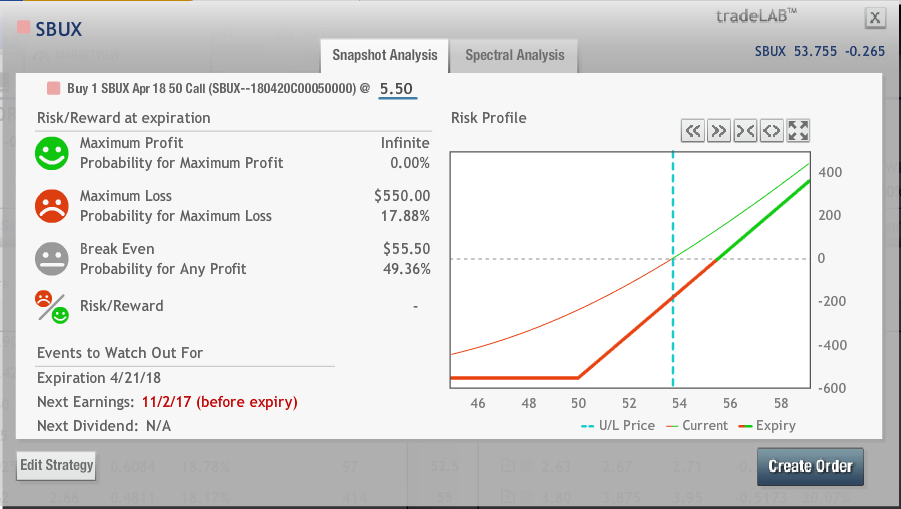 If shares move modestly just to the $59 midpoint of the trading range this option would be worth $9.00 for a 50%+ return on investment.