Back to Banks Bulls Eye took a 50% XLF winner in August.

The biggest winner in the glass half full perspective change are the banks, the beaten and battered banks that are still negative 40% in the last ten years compared to the broad market S&P barometer up 60%.

The financial crisis was many years ago but markets still feel like they are fighting the last war.  Banks have finally bounced back above the halfway point of the 2007 high to 2009 low..

The election and ensuing reduction of restrictions on banks boosted XLF from the $20 breakout base.

Action has been sideways for more than two months between $23 and $24 consolidating in a strong uptrend.

The January option has nearly a year for development and only costs $50 more than the June expiration.

Rule One:  Choose an option with 70%-plus probability.   The Delta is a measurement of how well the option reacts to movement in the underlying security.   It is also important to buy options that payoff from only a modest price move.

With XLF at $23.40, for example, an In The Money $20.00 strike option currently has $3.40 in real or intrinsic value.  The remainder of any premium is the time value of the option.

Trade Setup: I recommend the XLF January $20 Call at $4.25 or less. A close in the stock below $20 on a weekly basis or the loss of half of the option premium could trigger an exit.

The option also behaves much like the underlying stock with a much less money tied up in the investment.  The Delta on the $20 strike call is 82%.

The January option has more than eleven months for bullish development. This option is like being long the stock from $20 with completely limited risk. 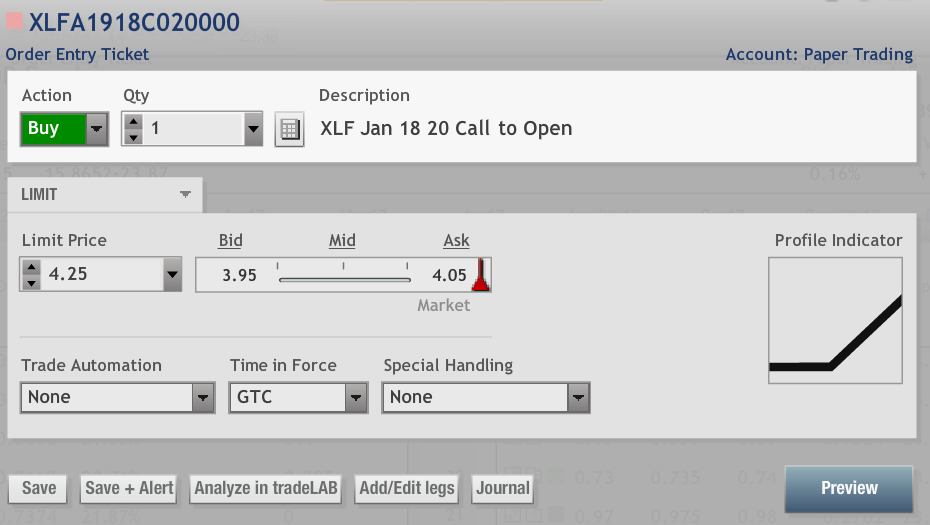 The maximum loss is limited to the $425 or less paid per option contract, with a stop at half of the premium paid.