A tale of two markets has the S&P and DOW major market indexes continuing the epic rally run more than 25% off the February lows with repeated new highs in the past days and weeks.  The relief rally has left behind tumultuous Tech that has not seen the tip top since waaaaay back October 25th now six long weeks ago.

The Nasdaq advancement stopped in its tracks as attention has shifted more to industry than innovators.  A short term shift saw money flows go to long neglected DOW stocks to produce DOUBLE DIGIT gains in Blue Chips for 2016.

S&P 500 broad market measure has surged in the last few weeks with YTD performance at plus 9% with less than a month to go this year. 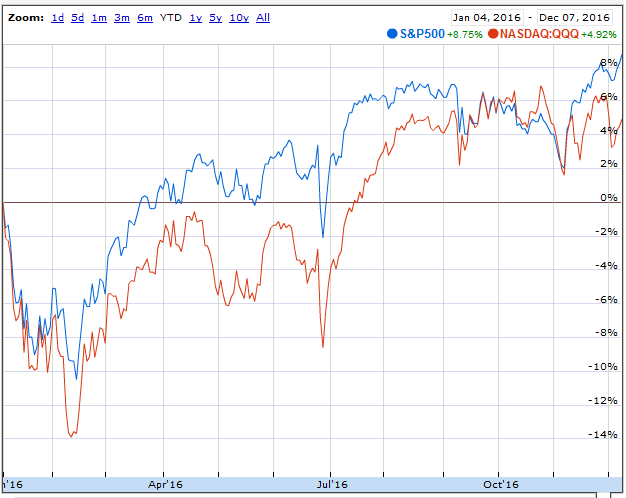 Compare that to the QQQ Nasdaq up only half of that AFTER this bounce to plus 4%.  The snap back potential has the reward to risk in favor of the bulls after backing off.

The BIG BOYS of Apple, Microsoft, Facebook, Amazon, and Google account for 40% of the weighting in the QQQ index.   This pullback in these OUT performers can be positioned with QQQ PowerShares for a second chance charge.

QQQ pause has trade tracking from $114 to $120 since August.  The summer breakout above $110 can be leaned on as a critical uptrend support point. 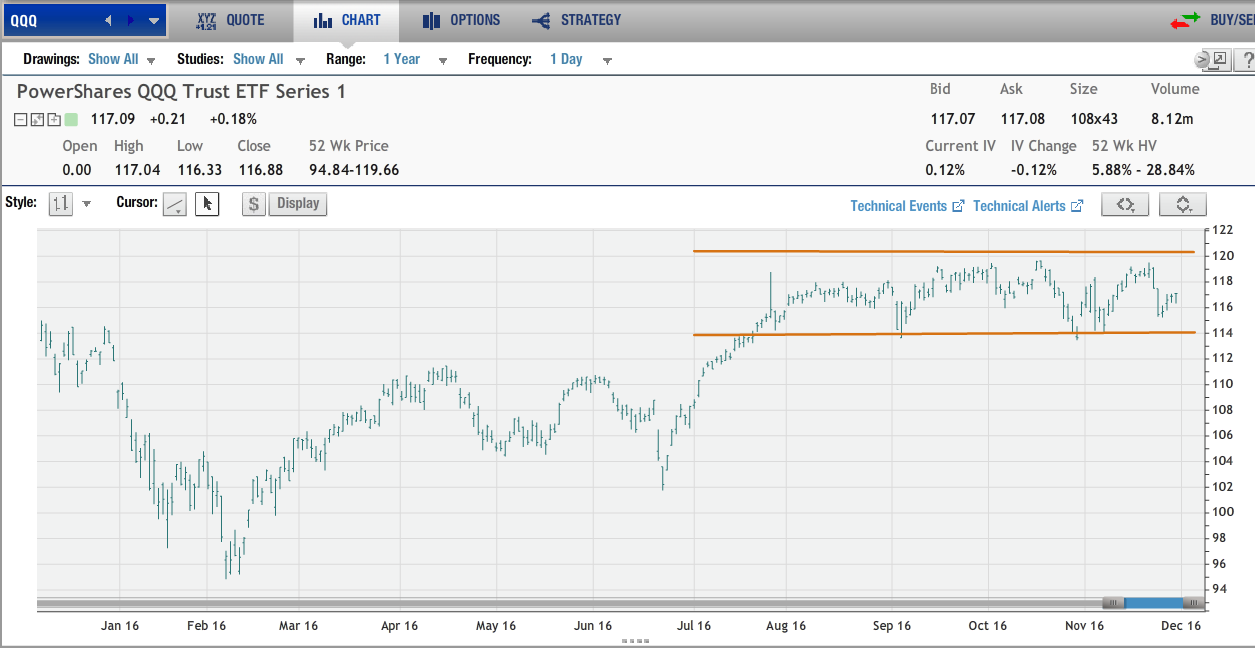 Currently trade is just at the $117 midpoint of the four month channel with a burst above a signal that another attempt attacking the highs is likely.

The larger technical objective is $126 as the measured move target from the distance of the channel trade on top of the $120 resistance.   An 8% potential pop is an opportunity to use the power of options for a capital preserving stock substitution strategy.

The March option has three months for Bullish development.

A QQQ PowerShares long call option can provide the staying power in a potentially larger trend extension. More importantly, the maximum risk is the premium paid.

With QQQtrading at $117, for example, an In The Money $110 strike option currently has $7.00 in real or intrinsic value. The remainder of any premium is the time value of the option.

Rule Two: Buy more time until expiration than you may need — at least three to six months for the trade to develop. Time is an investor’s greatest asset when you have completely limited the exposure risks.

A close in the stock below $112 on a weekly basis or a loss of half of the option premium would trigger an exit. Notice the $110 strike has the right to be long from a discounted level last seen in July.

The option also behaves much like the underlying stock with much less money tied up in the investment. The Delta of this $110 strike is 77.  That also approximates the probability that the option will be in the money at expiration.

The March option has nearly three months for bullish development, with the right to buy at five month lows. 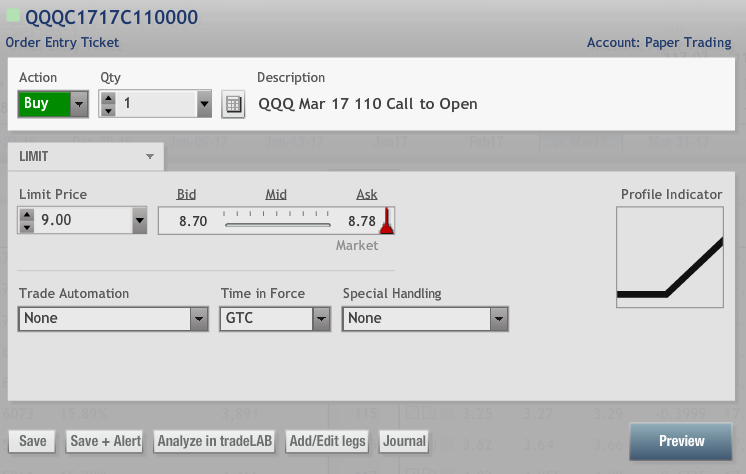 The maximum loss is limited to the $900 or less paid per option contract with an exit stop loss at half the option premium to reduce dollar exposure. The upside, on the other hand, is unlimited.

The QQQ option trade break even is $119.00 at expiration ($110 strike plus $9.00 or less option premium). That is two dollars above the QQQ current price.

A push above the $126 objective would put the option value at $16.00 would nearly double the original investment.