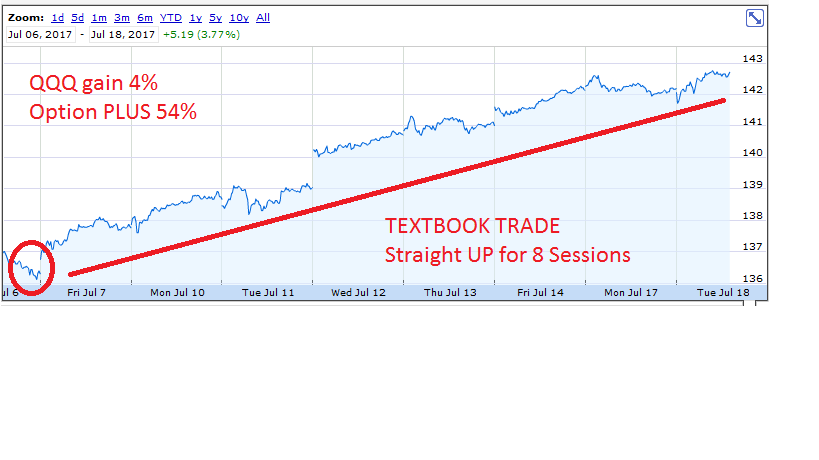 Gravity…the straight up 2017 rally run in the tech giants of Amazon, Apple, Facebook, and Google HAD TO have some unwind at some time.  The top stocks had jumped 25 and 30 percent by June.

New record highs were seemingly a daily occurrence in the Nasdaq with the top 100 tech stocks trending straight up.

The snap back potential has the reward to risk in favor of the bulls after backing off.

EVERY SINGLE SELLOFF IN HISTORY HAS COME BACK

The BIG BOYS of Apple, Microsoft, Facebook, Amazon, and Google account for 40% of the weighting in the QQQ index.   This pullback in these OUT performers can be positioned with QQQ PowerShares for a second chance charge.

It has been foolish historically to think the top is in …money flows can quickly move back into Tech.

The larger technical objective is $150 on a full “V” recovery and rally the distance of this latest downturn on top of the old highs.

The September option has two and a half months for Bullish development.

A QQQ PowerShares long call option can provide the staying power in a potentially larger trend extension. More importantly, the maximum risk is the premium paid.

With QQQ trading at $136.75, for example, an In The Money $130 strike option currently has $6.75 in real or intrinsic value. The remainder of any premium is the time value of the option.

Notice the $130 strike is at a level of SUPPER SUPPORT.

The option also behaves much like the underlying stock with much less money tied up in the investment. The Delta of this $130 strike is 75.  That also approximates the probability that the option will be in the money at expiration.

The September option has two and a half months for bullish development. 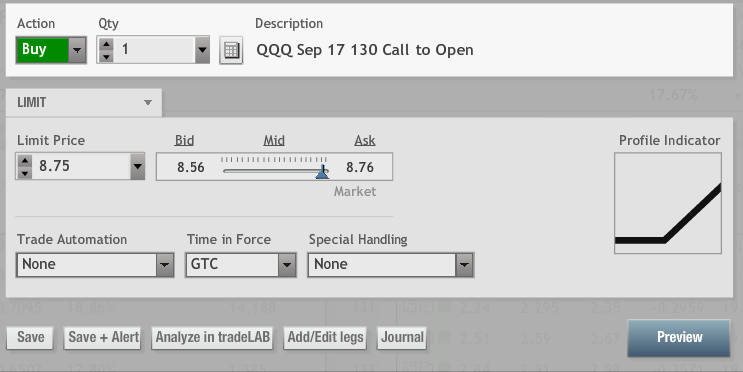 The maximum loss is limited to the $875 or less paid per option contract with an exit stop loss at half the option premium to reduce dollar exposure. The upside, on the other hand, is unlimited.

The QQQ option trade break even is $138.75 at expiration ($130 strike plus $8.75 or less option premium). That is two dollars above the QQQ current price.

A full “V” recovery to the old highs targets a technical move to $150.  That would put the option value at $20.00 to more than double the original investment.